Posted on December 25, 2013 by robertalexandersheppard 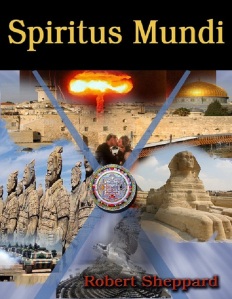 To See Poems from Spiritus Mundi on the Pyrokinection site see: http://www.pyrokinection.com/2012/06/three-poems-from-robert-sheppard.html

To see three more of the Poems from Spiritus Mundi on Poetry Pacific see:  http://poetrypacific.blogspot.com/2013/03/3-poems-by-robert-sheppard.html

Exfoliate of lives errant,
Exfoliate of dreams illusive,
Exfoliate of desires obscurant,
Exfoliate of loves derisive,
This only Tree
In Winter,
Inward flows its long sap,
Like the flowing of glass.
Far below, hung as on one branch,
City of Illusions,
Derisive, Buzzes,
Eternal dwelling place of subjective beings,
Stares out of windows, refracted honeycombs;
Do not believe they exist,
The men who pursue them.

The Lunatic of One Idea

In the Kingdom of the Blind,
The one-eyed man is King;
In the Empire of the Clouded Mind
The Lunatic of One Idea
Is tyrant dictator
And First Mover.
Hail the Saturnalia!
The First shall be Last!
Joyous Monomania!
Free at last,
Free at last,
Thank God Almighty,
Free at Last!

**These poems first appeared as part of Robert Sheppard’s novel, Spiritus Mundi. They are being reprinted here, with the author’s permission, for the reader’s convenience and enjoyment. (Copyright 2010).

About the Editor
A.J. HuffmanA.J. Huffman has published five solo chapbooks and one joint chapbook through various small presses. Her sixth solo chapbook will be published in October by Writing Knights Press. She is a Pushcart Prize nominee, and the winner of the 2012 Promise of Light Haiku Contest. Her poetry, fiction, and haiku have appeared in hundreds of national and international journals, including Labletter, The James Dickey Review, Bone Orchard, EgoPHobia, Kritya, and Offerta Speciale, in which her work appeared in both English and Italian translation.

a literary e.zine for true lovers of words & wisdom

Moby Dick
Again,
the human need for
surfacing
from meaningless
voids.
Again,  She blows, She breaches!
Again,
must we float,
that we may live.
These depths bring not
enlightenment,
but death.
Flotsam and jetsam,
return
us
to
the things
Of this world.
_____
Zeno’s Paradox
Words have power
To arrest the flight of an arrow
And the arrival of death
Is deferred
In a word—-
The delimiting case
Of the world.
The approach of
Death
Hollows out
Our present,
And the void
From which we speak.
Life begins in silence,
Ends in silence,
Its obituary
Then told in a language–
But a further edition
Of silence on silence.
______
Ineffable Qualia
What is it like to be a bat?
In the dark dark to live,
Hanging upside down in caves,
Navigating blind—
By the sonar of our own shrieks
Echoing from a shrieking world?
It is like nothing.
It is like nothing—-
Nothing but ourselves.
_______
[Editors Note:  The above poems first appeared as part of the novel, Spiritus Mundi, by Robert Sheppard.]
————
Poetry Pacific Founding Publisher/Editor-in-Chief:: Changming Yuan [pen name of Yuan Wumin], 7-time Pushcart nominee, grew up in rural China, began to learn the English alphabet at the age of 19 in Shanghai, and published several monographs before moving to Canada as an international student. While pursuing his graduate studies in University of Saskatchewan, he helped establish the Saskatchewan Chinese Monthly, and served as its chief editor until 1992. Since he obtained his PhD in English, he has been tutoring in Vancouver. Changming started to write poetry in English in early August 2004; since mid-2005, he has had poetry appearing in nearly 800 literary journals/anthologies across 28 countries, which include Asia Literary Review, Best Canadian Poetry (2009, 2012), BestNewPoemsOnline, In Other Words, Istanbul Review, Kwani?, LiNQ, London Magazine, Paris/Atlantic, Poetry Kanto, Poetry Salzburg Review, SAND, Saraba Magazine, Taj Mahal Review, Threepenny Review and Two Thirds North. On the Remembrance Day of 2013, Yuan established Poetry Pacific Press (PP Press) at http://poetrypacificpress.blogspot.ca/ in Vancouver. Blogsite:: yuanspoetry.blogspot.ca.

Robert Sheppard , Author, Poet & Novelist Pushcart Prize fof Literature 2014 Nominee Professor of World and Comparative Literature Professor of International Law Senior Associate, Committee for a Democratic United Nations (KDUN) E-mail: rsheppard99_2000@yahoo.com Robert Sheppard is the author of the acclaimed dual novel Spiritus Mundi, nominated for the prestigious 2014 Pushcart Prize for Literature in two parts, Spiritus Mundi the Novel, Book I and Spiritus Mundi the Romance, Book II. The acclaimed “global novel” features espionage-terror-political-religious-thriller action criss-crossing the contemporary world involving MI6, the CIA and Chinese MSS Intelligence as well as a "People Power" campaign to establish a United Nations Parliamentary Assembly on the model of the European Parliament, with action moving from Beijing to London to Washington, Mexico City and Jerusalem while presenting a vast panorama of the contemporary international world, including compelling action and surreal adventures. It also contains the unfolding sexual, romantic and family relationships of many of its principal and secondary characters, and a significant dimension of spiritual searching through "The Varieties of Religious Experience." It contains also significant discussions of World Literature, including Chinese, Indian, Western and American literature, and like Joyce's Ulysses, it incorposates a vast array of stylistic approaches as the story unfolds. Dr. Sheppard presently serves as a Professor of International Law and World Literature at Peking University, Northeastern University and the State Intellectual Property Office (SIPO) of China, and has previously served as a Professor of International Law and MBA professor at Tsinghua University, Renmin People’s University, the China University of Politics and Law and at the Law Institute of the Chinese Academy of Social Sciences (CASS) in Beijing, China. Having studied Law, Comparative Literature and politics at the University of California, Berkeley (Ph. D.Program in Comparative Literature), Northridge, Tübingen, Heidelberg, the People’s College and San Francisco, (BA, MA, JD), he additionally has been active as professor of International Trade, Private International Law, and Public International Law from 1993 to 1998 at Xiamen University, Beijing Foreign Studies University, the Chinese Academy of Social Sciences Graduate School (CASS), and the China University of Political Science and Law in Beijing. In the US he serves as a Professor at Kean University, as well as having taught at Bergen Community College and Pillar College in NJ. Since 2000 he has served as a Senior Consultant to the United Nations Industrial Development Organization (UNIDO) in Beijing and has authored numerous papers on the democratic reform of the United Nations system.
View all posts by robertalexandersheppard →
This entry was posted in Uncategorized and tagged 2014 Pushcart Prize Nominated Spiritus Mundi by Robert Sheppard, 2014 Pushcart Prize Nominee Robert Sheppard, A.J. Huffman, Booker Prize Shortlist, ChangMing Yuan, New American Poetry, New American Poets, New Voices in American Poetry, New Voices in World Poetry, New World Literature Poetry, New World Literature Poets, New World Poets, Poems from Spiritus Mundi, Poetry, Poetry Paciific, Pulitzer Prize Shortlist, Pushcart Prize, Pushcart Prize Nominated Spiritus Mundi by Robert Sheppard, Pushcart Prize Nominee Robert Sheppard, Pyrokinection, Robert Sheppard, Spiritus Mundi, Spiritus Mundi Novel by Robert Sheppard, World Literature, World Poetry. Bookmark the permalink.