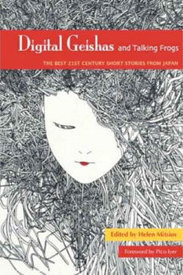 For those of you who are searching for new Japanese and Asian Voices World Literature Forum recommends "Digital Geishas and Talking Frogs: The Best 21st Century Stories from Japan" by Helen Mitsios a collection of contemporary Japanese short stories ranging from the hikikomori, or "Withdrawn Youth" literature to the anguish or anonymous sex in such writers as Yoko Tawada or the anomie of Haruki Murakami’s "Super Frog Saves Tokyo.